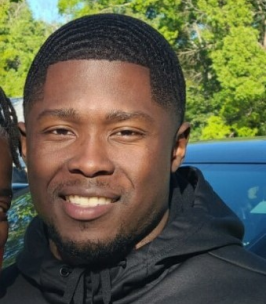 Devin Anthony Griggs was born April 3,1994, in Newark, NJ to Zaid Abdur Rahman Braswell and Quinndella Griggs. He graduated from the William R. Boone High School Magnet Program of Finance in 2012, and the University of South Florida Logistics & Supply Chain Program in 2016. After graduating from the University of South Florida, he went on to proudly serve in the United States Army.

Devin loved sports, at an early age Devin played Little League / AAU Baseball for many years. It was during this period where he developed a lifelong relationship with his Coach/Mentor/Father Figure, Jason Bertone. Jason was instrumental in setting the foundation for Devin’s determination, drive, and teamwork attributes.

Devin was a member of the Phi Sigma Pi National Honor Fraternity while attending the University of South Florida.

Devin spent 5 years in the United States Army, retiring from the Military as a Sergeant in 2022. During his tenure in the Army, Devin received numerous medals and campaign ribbons such as the “Army Achievement Medal”, “Army Good Conduct Medal”, “National Defense Service Medal” and “Overseas Service Ribbon” to name a few.

Devin’s sister Erin said he was funny, had a passion for food (especially pineapples), loved football, loved to dress & smell good, was caring, thought he was handsome, and protected her.

Devin’s brother Joshua said he was the brother everyone wish they had, basically taught me everything I know. I always looked up to him. We laughed all the time, always set me on the right path. Devin thought he was a good dancer; but he always cared for his family and always wanted to provide for us. He tried to make funny jokes, but they weren’t that funny.

Devin would often say his greatest achievement was becoming a father to his adorable, lovable, precious son, Roman. He loved his son unconditionally, there’s nothing he wouldn’t do for his son, Roman. He always would tell him he could do anything he set his mind out to do. He dreamed of the day when he could teach him how to play catch, play ball, fish, and swim. Devin and Roman would spend countless hours at the beach, they both loved the water and each other.

His Contagious Smile, His Bear Hugs, and His Drive/Determination will be greatly missed. We Love You Devin, “Devin D – Man”.

All rights reserved. This obituary is also archived at obittree.com